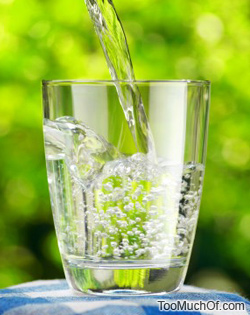 Water (in its pure state) is a compound that exists in a form of liquid that has no odor, taste or color. Almost 70 percent of the planet is covered by water. Water can exist in four states – as liquid, gas, a solid ice substance  and in a super-critical state when liquid and gas fuse together under high temperature and pressure.

Too much water drinking and dangers of water intoxication

Can we drink too much water? Yes, an excessive water intake within a short period of time can lead to water intoxication and inevitably death. Although a rare occurrence, there are plenty of documented cases each year where water intoxication is the primary reason for death.

Most common symptoms of water intoxication

The severity of symptoms is expressed following levels of salt in blood, however, with mild cases, the hyponatremia  often remains an undiagnosed condition.

Numerous illnesses of liver, kidney and heart have been associated with hyponatremia

A gradual drop in sodium levels to a very low level can be tolerated, however, if a rapid drop of sodium in blood serum occurs within under an hour, the condition may become extremely severe resulting in heart arrest and death.

How to avoid water intoxication known as hyponatremia