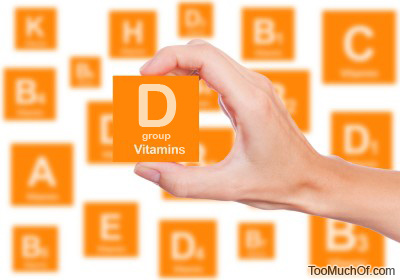 Vitamin D is a group of vitamins that are fat-soluble and classified as secosteroids. The most prevalent function of vitamin D group is to facilitate an intestinal absorption of phosphate and calcium. It also contributes to the skin health and helps dealing with skin conditions such as psoriasis, scaling red patches including but to limited to face, scalp, ears and genitalia.

Other vitamin D functions include maintenance of a healthy immune system, bone mineralization and remodeling, helping in prevention of depression, various types of cancers due to antioxidant activities, helping in treating of diabetes, obesity and may prevent an onset of multiple sclerosis.

Vitamin D group is synthesized from cholesterol when a human body is exposed to ultraviolet spectrum of the light coming from sun or a full spectrum artificial light source. Although this vitamin group is classified as a vitamin, it is not an essential dietary compound since it is synthesized by human in sufficient amounts with adequate amounts of ultraviolet light.

Side effects, conditions and dangers of too much vitamin D accumulation in the body

Supplementation of vitamin D and its effects on health is not well established. Although the researches show a potential benefits from supplementation, over-supplementation increases the toxicity of this vitamin group in the body since it is fat-soluble and is cannot be excreted from the body very efficiently.

Vitamin D should not be supplemented based on vitamin D levels alone. The levels of blood calcium, phosphorus and parathyroid hormone should be evaluated before supplementing, since it can lead to serious complications.

Symptoms of too much vitamin D retention in the body

Vitamin D levels can be maintained naturally with the following

A daily 10-minute exposure to sunlight may also produce enough vitamin D to avoid severe deficiencies and symptoms associated. Although a daily sunlight exposure can help to alleviate vitamin D deficiency, an extended exposure to UV radiation from sun can lead to increased risks of skin cancer.

If significant deficiency of vitamin D is present, it often indicates a poor digestion, including an impaired fat absorption from gastrointestinal tract. A common set of symptoms that indicate a poor digestion are bloating, acid reflux and either constipation or diarrhea.

One of the most common cause of an impaired digestion is an infection with H. Pylori bacterium. H. Pylori reduces stomach acid, initially causing acid reflux and bloating symptoms, often and mistakenly perceived as an elevated stomach acid. Taking antacids further impairs digesting process, causing even more fat and protein absorption issues which leads to depletion of minerals, fats and proteins in the body. Improving and restoring the digestion, will slowly overtime replenish vitamin D stores if the right diet is practiced.