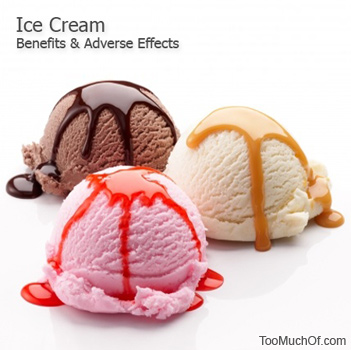 Ice cream is a frozen soft food made from sweetened and flavored milk fat. It is often combined with a variety of ingredients to produce different flavors. Ice cream products can also be categorized into products such as frozen yogurt, sorbet, frozen custard and gelato.

Too much ice cream can negatively affect your health

A calcium excess is a rare occurrence when consumed from dietary sources in healthy individuals. However, those who are affected by an imbalance in calcium metabolism caused by an abnormal levels of vitamins A, D, K, imbalance of minerals and hyperparathyroid, a hypercalcemia can frequently occur resulting in the abovementioned symptoms. Complications of hypercalcemia are often presented as pancreatitis, peptic ulcer disease, calcium deposits in the kidney, high blood pressure, kidney stones, difficulty concentrating or thinking and osteoporosis.

While a modest consumption of commercially produced ice cream should present no dangers to healthy individuals, those who are affected by digestive issues or improper calcium metabolism are advised to produce a home made ice cream, avoiding excessive sugars, fat content and additives. Healthy individuals should consume commercially produced ice cream on occasions and not to make it a staple in their current diet.

It is advised to eat ice cream and other products containing simple sugars after meals and not on an empty stomach. This will allow to reduce a rapid absorption of simple carbohydrates in the blood stream, which puts a significant strain on pancreas, increasing a chance of developing a pancreatic dysfunction. Pancreatic dysfunctions are often expressed as diabetes and hypoglycemia.

© 2020 TooMuchOf.com. All Rights Reserved. All trademarks are the property of their respective owners.
Posting....