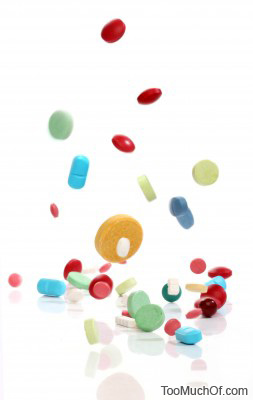 Antioxidants are molecules that prevent an oxidation process of other molecules. Excessive oxidation can create a significant amount of free radicals and can start reactions resulting in healthy cell damage or cellular death. On the contrary, even though oxidation process can be damaging, it is vital to healthy functions of an immune system.

Excessive anti-oxidation activity can lead to serious illnesses and death from the arising illnesses caused by inability of the immune system to use oxidation process to dispose of toxins and pathogens from the body.

As much as antioxidants can help in prevention of most dreaded diseases such as those those causing cancers, anti-oxidation may contribute to pathogen-overgrowth and cancers when the oxidation processes initiated by the immune system are significantly suppressed.

The key function in antioxidant process is to keep it at optimum level. Taking an excessive amount of antioxidant supplements such as beta carotene, vitamins C and E can be extremely dangerous.

Free radicals are generally oxygen molecules that are lost its electron. This molecular state makes them reactive (a.k.a. unstable). These molecules “attack” the nearest molecules in attempt to transfer their electron back to its body. This process makes them damaging to surrounding blood cells if a chain reaction is produced.

Although free radicals may seem like unnecessary and harmful elements, the human body actually harnesses the destructive power of free radicals by its own immune system to fight pathogens and cancers. These processes appear to engulf oxygen molecules from the blood serum, remove an electron from them and create a massive amount of free radicals which are then used against invading pathogens and toxins.

Too much antioxidants activity may result in mutation of stem cells

A human heart tissue reconstruction researcher Eduardo Marbán and his colleagues have made an incidental discovery while using excessive antioxidant activity in attempt of reducing of genetic abnormalities that normally occur while multiplying cardiac stem cells… The stem cells rejection of these lab-grown stem cells resulted in 9% increased rejection rate because of amplified genetic abnormalities of the newly grown stem cells.

“We sought to counter that oxidation problem by adding high doses of antioxidants directly to the cells,” Marbán said. “That’s when we made the serendipitous discovery that there is a danger zone for the cells exposed to antioxidants to develop genetic abnormalities that predispose to cancer.”

Our bodies’ biochemical mechanisms create specific complexes which utilize the free-radical population, therefore it would be a harmful process to suppress the free radicals in significant amounts. The solution seems to be to let the human body to balance antioxidative and oxidative processes by own genetic mechanisms.